Agate is a variegated class of chalcedony, usually exhibiting coloured bands or other markings. Some agate is not patterned.

In addition to the properties listed under chalcedony, agate provides for balancing of yin-yang energy and for balancing of the physical, emotional, and intellectual bodies with the etheric energies. It stabilizes the aura providing for a cleansing effect which acts to smooth dysfunctional energies and to both transform and eliminate negativity. It further assists one in the development of precision in examination of one’s self and of circumstances relevant to ones well-being.

In historical times, it was placed in water for use in cooking and/or for drinking in order to dispel sickness.

Agate can be used to stimulate analytical capabilities and precision. It provides for perceptiveness to situations and awakens one inherent talents and adroitness. It is also used to produce inspiration from and connected-ness with the entities residing in the spiritual worlds.

It has reported to strengthen sight, to diminish thirst and to promote marital fidelity. 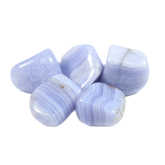 Blue lace agate displays a blue and white lace pattern. It can help one to reach extremely high spiritual spaces. It contains the qualities of flight, air, movement, and grace. It has a highly inspirational influence when used for inner attunement.

The energy of this mineral is most useful at the locations of the throat chakra, the heart chakra, the third eye, and crown chakra. Activating these chakras it helps one to enter into high-frequency states of awareness.

Blue lace is especially suited to those gentle people with shades of pale blue in their aura.

It can be used in the treatment in arthritic conditions and in cases of "hereditary" bone deformity; it can also be used to strengthen the skeletal structure.

Blue lace agate can help to remove blockages from the nervous system and from the capillaries of the body. It can be used in the treatment of disorders of the pancreas and of those glands inherently associated with digestion. 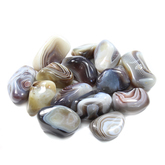 Botswana agate is a purplish-grey fortification agate exhibiting white patterns of, usually, circles or avoids. It is generally found in the form of nodules.

It can be used to stimulate the exploration of the unknown and to further ones quest towards the enlightened state. It enhances creativity and helps one to release the emotional nuances which have been repressed. It also allows one to look toward the solution, rather than dwell on the problem.

It stimulates the crown chakra and energizes the auric body, encouraging eternal love and allowing for the recognition that eternal love is a constant in the ever changing universe.

It helps one to maintain a forthright character and to sustain an attentiveness to detail which further facilitates the sensitivity to, and the recognition and the understanding of, the complete picture (regardless of distortion).

Botswana agate can be used in the treatment of disorders of the nervous system and help to rid the body of toxins. It is said to counteract poisoning on the physical, emotional, and intellectual planes. It can also be used to ameliorate depression and stress.

Moss Agate is a transparent to translucent agate containing inclusions of minerals resembling moss or foliage. It is usually found in massive form and, occasionally, within the configuration of a thunder egg.

Moss Agate leads one toward the characteristics of agreeability, persuasiveness, strength in all endeavors, and efficacy in all pursuits.

It helps to improve ego and self-esteem, providing for emotional balancing and strengthening of the positive personality traits. It allows one to see the beauty within all that one’s eyes touch.

It is said to help one in the acquisition of riches.

It is also said to bring one the powers of speed.

It can be used in the treatment of dehydration and disorders of the eyes, to ameliorate fungal infections, to stimulate digestion and the elimination of toxins from the body, and to relieve the symptoms of colds, internal infections, and flu.